Hillsboro Aero Academy is pleased to recognize one of its own for winning the 2017 Appareo Pilot of the Year Award. This award, presented by Helicopter Association International, is given to an active pilot who has demonstrated an exceptional act of professionalism. One of the 2017 winners of this prestigious award is Trent Vick, a current helicopter CFI and former student at Hillsboro Aero Academy.

Trent started dreaming about becoming a pilot in 2008 when he attended a medical career presentation and an appearance by an EMS helicopter caught his attention. He quickly realized a career as a pilot was an attainable goal. In 2009, Trent joined the US Air Force and used his GI Bill benefits to help fund his flight training at Hillsboro Aero Academy. After completing this Commercial Pilot Certificate, he was hired by Helicopter Transport Services to work as an S-61 copilot fighting fires across the Northwest.

This past summer, Trent was paired up with Robert Fournier, the other Appareo Pilot of the Year Award recipient, to fly firefighting missions. While working in Riggins, Idaho they were dispatched to assist with the Cooper King Fire that had tripled in size quickly due to wind. They worked tirelessly for several days in difficult conditions to help contain the fire, their efforts helped protect ground crews and kept the fire from spreading to nearby homes.

During their water runs to the Clark Fork River, they noticed a young boy who was particularly enthralled by the helicopter and would wave each time they passed. His father was a firefighter working to combat the same blaze. After the fire had been contained, Trent and Robert went back to find and meet the boy. They were each bitten by the aviation bug at a young age and wanted this young man to have the same positive experience with aviation. 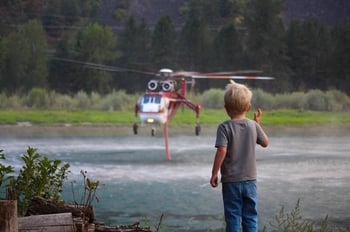 “I am extremely appreciative of the experiences I have had as a helicopter pilot from assisting with agricultural operations to firefighting and now instructing at Hillsboro. These opportunities have helped solidify my choice to pursue a career as a helicopter pilot. This line of work presents its challenges, but it has been very rewarding for me. I hope I can take my experiences and inspire others to pursue similar passions,” said Trent.

Trent currently works as a CFI for Hillsboro Aero Academy and continues to have an impact on the future generation of aviators. Congratulations, Trent! We are so proud to have you as part of the HAA team.