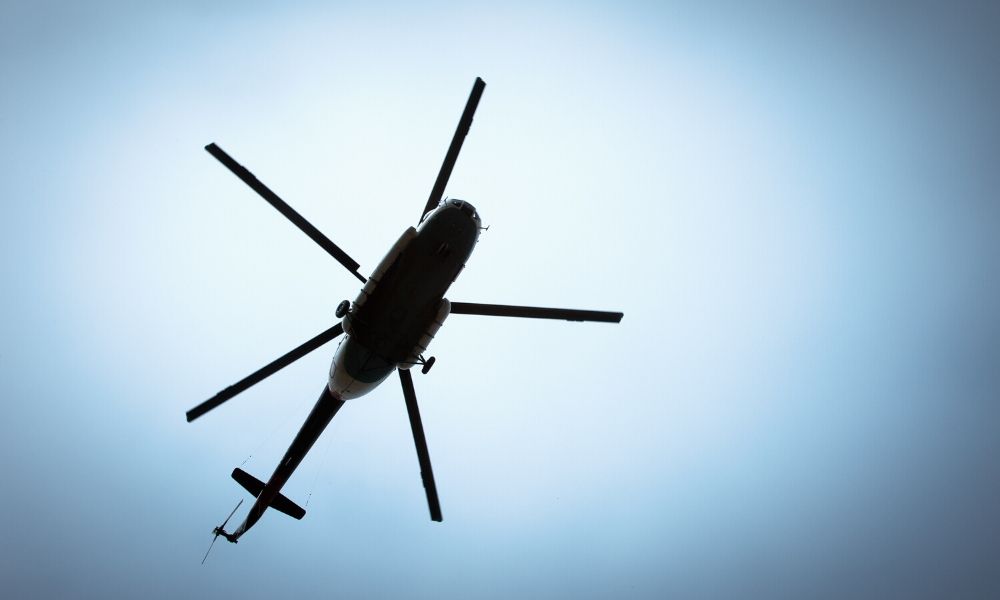 If you’ve ever thought about just how heavy a helicopter is, you might have wondered how it can lift itself into the air with such ease. Without a doubt, many processes go into producing this phenomenon. So how does a helicopter fly? Here are some of the basic principles that are at play in this gravity-defying machine.

To move upward into the air, the helicopter must create an upward force, known as lift, that counteracts the downward force of gravity. One principle that helps accomplish this is the difference in the air pressure above and below the rotating blades of the primary rotor on top of the helicopter. Manufacturers shape each rotor blade so that it cuts through the air as it spins. The movement results in less air pressure above, and more air pressure beneath the rotor, which helps to lift the aircraft upward.

In simpler terms, the rotor forces air below it, pushing the helicopter in the opposite direction with an upward thrust force. Professionals refer to the component of this thrust, which is in direct opposition to gravity, as lift. It is mainly this component which is at work in the flight of helicopters and airplanes. However, the overall thrust of the propeller is not necessarily completely vertical to the ground. Often, it will tilt slightly in different directions to move the helicopter forward, backward, or sideways while it continues to hold itself up in the air.

Have you noticed that helicopters always seem to have at least two propellers located on their bodies? There is a good reason for this—Newton’s Third Law of Motion. The law states that “for every action, there is an equal and opposite reaction.” The helicopter experiences this when the force or action of the counterclockwise spinning primary rotor causes its fuselage, or main body, to spin in the clockwise direction. Without the proper reaction force, the main body would continually spin, making the helicopter nearly impossible to control.

The purpose of the secondary rotor (or tail rotor) of a helicopter is to provide an antitorque force to counteract the torque, or turning force, created by the main rotor by creating a thrust force in the opposite direction. With this, the pilot can safely maneuver the helicopter without perpetually spinning when they leave the ground.

These mechanisms can feel quite complex. However, with the right commercial helicopter flight school, you’ll be able to learn and apply concepts like this and many more as you learn how to pilot safely and knowledgeably. If you’re considering becoming a helicopter pilot, contact Hillsboro Heli Academy today. We can help you begin the path to a flight career and answer any questions you may have about the field.