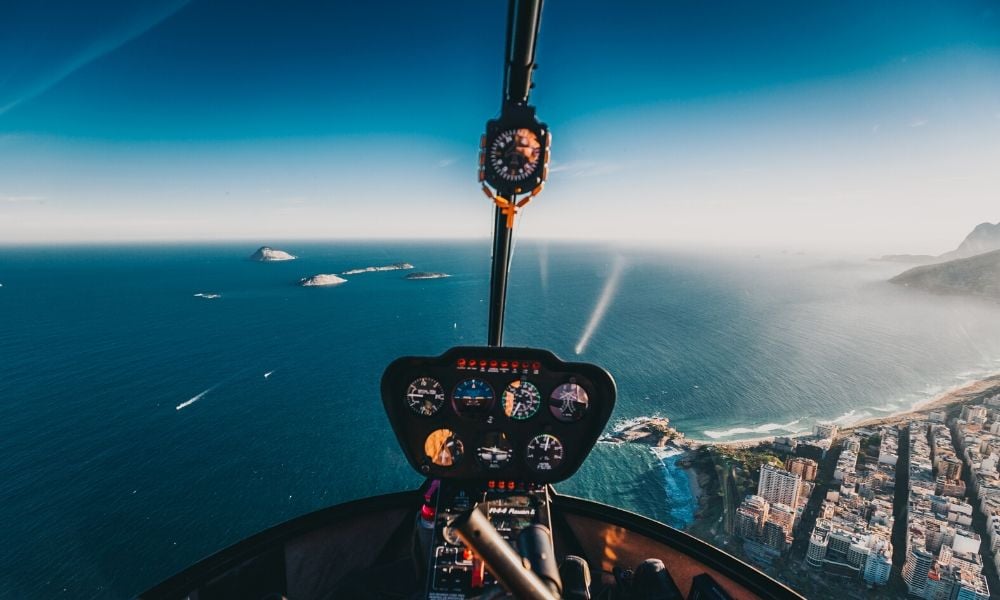 Chances are, you’ve probably ridden an airplane and perhaps caught a glimpse of the landscape out of the little oval window. It’s one thing to go up into the sky in a closed-off cabin but it’s another to truly take in and experience some breathtaking sights from above. Thankfully, helicopter tours exist, and they offer up a view of some of the most impressive places around the world. Here are some of the world’s coolest helicopter rides.

Millions of years have sculpted the Grand Canyon into a majestic landscape where the formations display gradients of rock in horizontal layers. While you may just visit on foot, you’ll only see the area from one small vantage point. Via helicopter, you can go much further into the canyon and see the many heights and depths that wind their way through paths eroded by the work of the Colorado River.

Snowy mountains form the white and charcoal-colored expanse of Juneau Icefield, while more than forty glaciers form the smooth paths between the jutting crags. Chief among these glaciers is the vast Mendenhall Glacier, which is about 13.5 miles in length. With a helicopter tour, you can not only fly over Juneau but also land in areas of the glaciers that are difficult to reach when traveling by land.

The state of Hawaii’s largest island, Hawaii (also known as The Big Island for distinction) is home to active volcanoes, tropical forests, and waterfalls. Get in closer to the ever-changing lava flows and reach otherwise inaccessible spots with helicopter rides that will take you all around the island.

Rio de Janeiro has the second largest population in Brazil and is the sixth-largest city in both North and South America. While you might see the famed Christ the Redeemer Art Deco statue overlooking the city from down below, boarding a rotorcraft to circle around it will give you arguably the best view of the statue itself and the surrounding coast, Sugar Loaf Mountain, Corcovado Mountain, and the Tijuca Rainforest. You’ll also get to dodge the crowds of tourists that will inevitably gather around the statue.

Flowing between the countries of Zimbabwe and Zambia, Victoria Falls stretches about 354 feet high and 5,604 feet across down into deep gorges that cut a natural border for the two nations. It is about double the size of Niagara Falls, and its combined height and width make it the largest waterfall in the world overall. It is also known for the great mist that spreads into the air as the Zambezi River’s water cascades over its edge, creating huge rainbows.

If you’re looking to spot some exotic animals in the sprawling savannah and forests, Laikipia Plateau is among the best places to visit. Conservation has ensured that the area’s pristine natural condition remains preserved, meaning that you won’t miss out on any of its original allure. The helicopter rides that you can take there also show you magnificent Mount Kenya, which is second only to Kilimanjaro in Africa.

Every year, the daring seek to ascend to the summit of Mount Everest—the tallest mountain on Earth. But you don’t have to be an expert hiker and climber to appreciate the beauty of the location. Helicopters will carry you through the awe-inspiring mountain range and set you down at Everest Base Camp, right at the foot of the regal mountain.

The city of Hong Kong is an attractive mixture of azure ocean, lush green hills, and tall skyscrapers. You can fly over Victoria Harbour, which separates the Kowloon Peninsula from Hong Kong Island, and Victoria Peak, where you will get a clear view of the nearby islands and the central business district. Notable among the helicopter rides offered there is the one given by the Peninsula Hotel. Its helicopter takes off from a helipad on top of the building.

Like Hong Kong, Sydney is a city built next to the ocean. However, the one-of-a-kind appeal of Australia’s largest city lies near sights such as the iconic Sydney Opera House, Bondi Beach, and the Sydney Harbour Bridge. Some tours also take you by the Blue Mountains, which border the city and get their name from the blue haze that blankets them. If you want to experience an exhilarating thrill, you can also seek out special helicopter rides where the doors of the aircraft or taken out, exposing you to the open-air while you are onboard.

As the largest coral reef in the world, the Great Barrier Reef attracts multitudes of tourists who come on boats and scuba divers who want to get in close to the marine wildlife. To get a unique sense of the full scale of the reef though, you should seek an aerial view from a helicopter. You’ll see the varied reefs show through the clear blue waters in curved and flecked patterns. If you want the best of both worlds, some tour companies include snorkeling and helicopter rides together.After you have experienced a helicopter ride or two, you may consider one day becoming a helicopter pilot and giving tours in such picturesque locations yourself. If you’re thinking about enrolling in helicopter flight school and have any questions about applying or what to expect, call Hillsboro Heli Academy today. Our alumni have attained rewarding professions flying in many different countries across the globe.

The Amalfi Coast in Italy is known for its quaint seaside towns built in vertical terrace layers on the sides of the mountains. With the benefit of flight, you can explore the area through the streets and see the architecture in its full elegance from the sky. You can also travel from town to town along the coast, and many helicopter tours offered in the region will also take you as far as Mount Vesuvius and Pompeii.

After you have experienced a helicopter ride or two, you may consider one day becoming a helicopter pilot and giving tours in such picturesque locations yourself. If you’re thinking about enrolling in helicopter flight school and have any questions about applying or what to expect, call Hillsboro Heli Academy today. Our alumni have attained rewarding professions flying in many different countries across the globe.